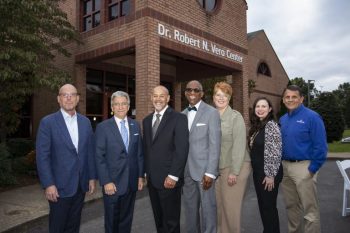 Speaking to a crowd of colleagues, friends, and family at the dedication event, Vero said, “Thank you for honoring me in this special way. There are no adequate words to express my appreciation. There is, however, an overwhelming amount of heartfelt gratitude. As I leave you honored and humbled seeing my name above that door, maybe in some inexplicable way, I can remain here with you to welcome those who enter.”

In his four-decade tenure, Dr. Vero helped Centerstone grow from a relatively small company into one of the largest community-based behavioral health providers in the United States. He joined Centerstone’s legacy organization, Luton Mental Health Services, in 1980 as a therapist. Rising through that company, he became executive director in 1989 and served in that capacity until 1998, when Luton Mental Health Services joined the Centerstone family of companies where Vero was named president and chief operating officer. With additional affiliations in 2008 that formed the national Centerstone organization, Vero ascended to the role of CEO of Tennessee operations.

Prior to being named the Dr. Robert N. Vero Center, the Centerstone clinic at 1921 Ransom Place was known as the Frank Luton Center in tribute to the pioneering Tennessee psychiatrist of the same name.