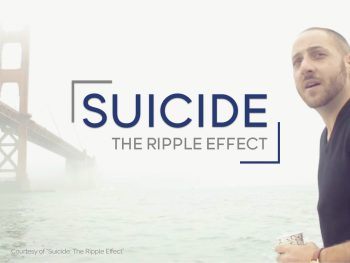 Centerstone, one of the nation’s leading providers of mental health and addictions care, partnered with Kevin Hines to produce Suicide: The Ripple Effect.

Suicide: The Ripple Effect shares the story of Kevin Hines, who at age 19, attempted to take his life by jumping from the Golden Gate Bridge. Hines is one of only 36 individuals to survive this jump. Seventeen years later he is on a mission to use his story to help others find hope and stay alive. The film is part of a global mission to help reduce the number of suicides and suicide attempts around the world.

Centerstone, who has long sought to reduce suicides in their communities through education, outreach and treatment, served as a producer for the film.

“We know that suicide is preventable. For years, it was believed that you couldn’t stop someone from ending their life. Research shows, now more strongly than ever, that this isn’t true. We believe this film will change lives,” said David Guth, Chief Executive Officer of Centerstone. “By sharing stories of survival and recovery we hope individuals will find the support they need to stay alive, heal and #BeHereTomorrow!”

Suicide: The Ripple Effect And Its Impact

Across the globe, nearly 1 million people die annually by suicide. In the United States alone there are one million suicide attempts every year and over 40,000 deaths by suicide, with our military being hit particularly hard.

“This film shows my journey to better understand the effects of my suicide attempt on my family, friends and the first responders who saved my life.” says Hines “My hope is the film will get people talking so those struggling can find ways to connect and heal.”

Research has shown that for every one death by suicide, over 115 people are directly affected and impacted. The estimated financial cost of suicide is over 50 billion dollars annually.