Life Changing: A Personal Remembrance of 9/11 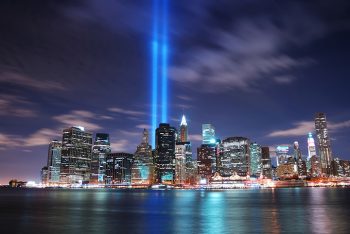 It’s September 23, 2001, and our U.S. Air flight from Nashville to New York City’s LaGuardia International Airport has been canceled. We were soon rebooked via American Airlines. The friendly face of our ticket agent noticeably tenses upon seeing our tickets are from another carrier. As technically, non-ticketed passengers, we’re asked to move to a special baggage security area.

Here, our luggage is hand-searched one garment at a time. I watch as the polite, somewhat anxious security guard lifts a shoe from the bottom of my luggage. At first, he dislodges a pair of rolled socks. Then, a hesitant hand reaches further into my shoe and slowly, very slowly removes a fairly heavy electronic device.

“It’s a flash unit for my camera,” I respond.

He rotates it between both of his hands, notices a glowing red light and, again, questions me. “Why is it on?”

Reaching across the table, I turn off the flash. With an assuring tone, I say, “I don’t know, maybe you turned it on when you pulled it out.” We are eventually cleared for boarding.

En route to New York, the recirculated air is heavy with the aftermath of 9/11. As we near LaGuardia, our approach takes us directly over lower Manhattan. Along with everyone else, I look, both wanting yet not wanting to see the image already forever burned into my consciousness. The cloud cover was heavy. For now, there would be no new images — thank God.

Upon arrival, I’m a little out of sorts because the airport is virtually empty; the usually hard-to-find limo and taxi drivers are looking for passengers and cutting deals. The picture is all wrong. As we approach the city, I see where the north and south towers are supposed to be but are no more. We soon enter a place as unfamiliar to me as its cruelly altered skyline. There’s no Big Apple hustle and bustle. Traffic moves more slowly; honking horns are silent. No one yells, “taxi!”

Instead, there is a quiet, pensive kind of reserve, a politeness, and sense of courtesy among strangers. There is a look of calm and understanding in the eyes of people who pass one another on the street, constant communication without the sound of words.

Many things seem to have changed in the course of less than two weeks. I wonder when, if ever, they’ll return to normal.

Years later, I’m still asked, “What did being a volunteer in New York City after 9/11 mean to you?” And I still give thought to my wife’s direct question upon return: “Was it life-changing?”

It was. I’d been invited by Doctors Without Borders to help provide crisis care services to a community in great need. To this day, it’s easy to recall comments from conversations shared during that stay. What I heard were feelings reduced to words, sparked by the deepest of human emotion brought to the surface by visceral anger and heart-wrenching pain.

A mother asked: “Why did my only daughter have to die?”

A father said: “I’ve got four kids, she was the oldest, the one who followed in my footsteps — finance. I can’t but think if she had chosen a different profession that she might still be alive.”

A wife said: “I won’t use the answering machine anymore. His voice is on it, and I am afraid something might happen to it. He called me from inside the tower. His last words were, ‘I love you, don’t worry about me.’”

A fiancée said: “We were supposed to get married this spring. I don’t know what to do.”

A displaced worker said: “I’m a first-generation Arab-American. I had nothing to do with anything that happened. Do you think anyone cares that I’m American? Tell me, who’s going to hire me?”

Indeed, going to New York City was a life-changing event.

I saw the biggest funeral pyre in the world, this one not made of ceremonial wood but constructed of steel, aluminum, and glass. I saw the Wall of Bears — hundreds of teddy bears adorned with loving messages sent from survivors, family members, and emergency workers from Oklahoma City. I saw more make-shift memorials than I can recall, plastered with posters and pictures of missing loved-ones.

There were goodwill drawings sent by countless school-aged children from around the world. I saw a winged belly dancer perform her interpretation of John Lennon’s “Imagine” as his music and lyrics played over and over again on her compact stereo. It was a rainy 45-degree Sunday afternoon at Union Square.

I felt Lisa’s spirit when her mother hugged me, cried on my shoulder and thanked me for coming all the way from Tennessee. She had traveled from Delaware to collect her daughter’s possessions; it took almost two weeks for her church to raise enough money for her to travel to New York City.

I heard Sean’s Irish sense of humor as his fiancée, Jenny, retold stories of some of their best times together. I asked her to take me to the Wall of Bears and point out Sean’s picture. Of course, she did.

At the Family Assistance Center, I heard sobs from children whose fathers were still at work and probably never coming home. I placed my hands on the shoulders of men who wanted to go search for their wives. I talked with people who refused to fill out a death certificate and thus forever change the status of their loved-one from “missing” to “deceased”.

I heard the wailing of grief so deep that, at times, I couldn’t speak — the lump in my throat paralyzing my vocal cords. It was then that I was reminded that holding a hand and offering a hug is a form of human language that knows no mountain, nor ocean, nor desert too large to cross.

I saw people walking up to police officers and firefighters — some to say “thank you,” others just to get close.

No, I didn’t work at Ground Zero or on “the pile.” I’m a mental health clinician and health care administrator, not a pipe cutter, steelworker, heavy equipment operator, search and rescue dog handler, first responder or uniformed services’ chaplain.

Most of our work involved consultation and training with organizations and individual providers of behavioral health care. We started every day by 7:30 and retired late. Saturday and Sunday were just two more days.

We assisted organizations with their crisis response efforts and much needed organizational retooling. We challenged them to stop and catch their breath when they believed that they could not. We encouraged inter-agency collaboration, stressed the importance of frequent written communication to staff and encouraged self-care.

We told them how much we admired their willingness to bring in outsiders and, moreover, told them that we saw their self-recognized vulnerability as a strength and not a weakness.

We spoke at a hospital’s weekly training seminar for its emergency room resident physicians and consulted on several occasions with the employee assistance program of a major hospital system.

We also talked with Arab-Americans who felt threatened by the emerging negative cultural bias.

We said, “Sure, 7:00 p.m. to 10:00 p.m. will work fine for us,” to a group of eager, talented and very seasoned mental health professionals who heard about our arrival and wanted some consultation and training. In exchange for a meeting room, some handouts and an atmosphere for group process, they provided the baked goods and an insatiable hunger for knowledge. We left the office after 11:00 p.m.

We often had to remind ourselves that we were in New York to, in a sense, “teach people how to fish,” rather than to fish ourselves. We kept telling ourselves that if we did our job correctly — provide help to the helpers — that more people would, in turn, be helped by those organizations and independent practitioners.

Late one afternoon, we did a telephone interview with the Tennessean back in Nashville. I recall telling the reporter there was good and bad news to report from New York City. The bad news was there was still so much more to be done. The good news was the streets of New York were coming back to life; the cabs were incessantly honking their horns.

I can personally tell you the scope of the World Trade Center disaster was beyond anything I ever imagined. I’m not talking about “the pile” at Ground Zero which, by the way, was probably ten times larger than the images portrayed on television. I’m really talking about the shock waves that reverberated in New York City, throughout our nation and through much of the world. I left with mixed emotions, physically tired and emotionally spent. But it meant so much to me, as a New Jersey native, to have that chance to “go home” in a sense, to help my former neighbors.

Finally, I remember a sermon my pastor gave after 9/11 about defining moments. Some, he reflected, were highly personal — divorce, a loved one’s death, abuse as a child. As a minister, he witnesses people spending a lifetime searching for peace. As a once practicing clinician, I’ve witnessed the same — lifelong searches for meaning and resolution. Defining moments are those developmental experiences or events that create new meaning, new perspectives and new world views in our lives. They change our understanding of normal, alter our course or change the very meaning of our existence.

In one way or another, we were all changed that day. Those horrific early morning hours and countless moments to follow provided each of us with an opportunity to evaluate and redefine our lives.