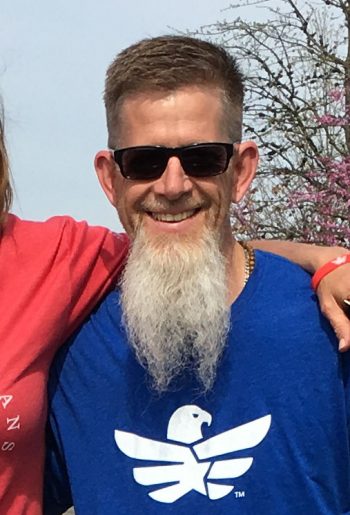 Here at the Steven A. Cohen Military Family Clinic at Centerstone, we are grateful for the many community partners that share our passion for caring for our military Veterans and their families. We are honored to work alongside these organizations as together we ensure our nation’s heroes and their loved ones know they are never alone. To that end, we would be remiss if we did not share their amazing stories of serving. Here is a closer look at one such partner and friend of the Cohen Clinic at Centerstone, Team Red White and Blue leader Curtis Driver.

Shakespeare once wrote, “what’s in a name?” challenging audiences to ponder whether or not a designation determines character. In Romeo and Juliet, the point is clear; a simple identifier should not define the man. However, here in Clarksville, TN, 2019, at least one person’s name may be forcing some to shake their heads and ask the question again. Curtis Driver.

See, Curtis is always smiling. At least that’s the way it seems. Whether he’s on the yoga mat inside the Cohen Clinic’s community room, or out at the Tennessee State Veteran’s Home playing games with those who served before him. Curtis Driver is just a happy guy. So much so, one would never guess that his grin had once faded, or that he just got it back not too long ago by living up to his name.

To put it simply, Driver has drive. Even when life throws its punches, he’s not one to stay down for long. This quality was evident from a young age when he proved he’d stop at nothing to realize his childhood dream, then again when harsh realities took it away.

“I just wanted to help people,” Curtis recalled in a recent phone interview likely on his way to do just that.

Back then, for Driver, that meant working in the medical field so he devoted himself to his studies, earned a bachelor’s degree in science athletic training and sports medicine and went on to work in the industry with a passion. He held positions inside a physical therapy clinic, as a high school athletic trainer, and even with the Kansas City Wizards Major League Soccer team. Yet, he quickly learned he wanted to do even more. He wanted to go to medical school.

Undeterred by the demands of such a challenging and costly program Driver researched his options and recognized that the Army might hold the key to his dream. One month before 9/11, at the age of 31, Curtis set out to basic training at Fort Knox. He went on to complete medical training at Fort Sam Houston, reported to Fort Carson as a combat medic, and deployed to Iraq in 2003. After returning from his tour, Driver wasn’t finished. He still longed to reach his goals and fought for the chance to go to Physician Assistant (PA) School. In 2005, he completed his residency, his medical school and Army officer course requirements and reported to Korea. His dream no longer a dream. He was a PA.

For 8 years Curtis was able to live that dream. He did so while serving in Korea, Iraq, and Germany. Yet along the way, life, as it often does, took a turn. Curtis began to show signs of rheumatoid arthritis a condition that threatened his ability to remain in the Army. Forced to fight again he convinced a medical board to retain him so he could continue to fulfill his life’s mission. Eventually, however, the pain became too much. His medications began to fail, he struggled with PTSD and anger and when coupled with his physical ailments he knew he was left with no choice but to accept a medical retirement.

“They don’t tell us about or educate us on what to do as we’re on the way out of the military and so each soldier has to figure out how to fill that void,” Curtis explained, remembering his feelings of hopelessness. “Many of us turn to things that are not necessarily positive.”

Driver’s physical condition ultimately rocked his entire world off its axis. Not only did it shatter the career he worked so hard to build, but it also hindered many of his passions such as running, scuba diving, and biking. He admits he was in a tough place and felt himself living in the background of the world around him, searching desperately for a new dream to dream, only to find that this time it wasn’t so simple amidst the nightmares; that is until he took a chance and attended a Team RWB event.

“In July 2017 when I started with Team RWB here in Clarksville I could barely leave the house and didn’t really want to interact with people at all,” he recalled. “I was in pain and angry all the time and didn’t do much.”

Thankfully, that changed. Knowing he had to fill the void he mentioned earlier, Curtis recognized that Team RWB’s mission to connect veterans through a physical and social activity called to him. He began to attend team socials, runs, and Veteran’s Home game nights regularly. He branched out further and encouraged others to join him when the Cohen Clinic began offering yoga, and dinner and dancing date nights. He embraced the team’s ethos: passion, people, positivity, commitment, camaraderie, and community and he began to feel he belonged again.

“Because of the encouragement, friendships and new bonds I have made through Team RWB I have a new outlook on life. I have pushed boundaries and limits that I never thought possible and have accomplished things that I never imaged that I would do.”

Today, Curtis is the team’s Veteran Engagement Director and is a constant presence in the community inspiring others and sharing his story.

“His huge heart and passion for helping veterans and others are not only amazing to watch, but it is also motivating to those around him.” Rebecca Brooks said of her fellow RWB teammate. “We can’t thank him enough for what he’s done to give back to our community.”

As for why he does it, Driver simply answered with this, “I don’t want the pain and things that I went through to be for nothing. Being silent about it only hurt me. If being transparent and sharing about the things that I have been through helps even one person then it’s worth it. We survive things so we can, later on, help others through similar situations.”

Maybe to help teach them to drive on. Take that Shakespeare! Said with a smile of course.

For more on Team RWB, including a calendar of events happening in and around Clarksville log onto https://www.teamrwb.org/chapter/team-rwb-clarksville-fort-campbell-tn/. To join Driver and his teammates in yoga and other events at the Cohen Clinic at Centerstone check out the clinic’s Facebook page.