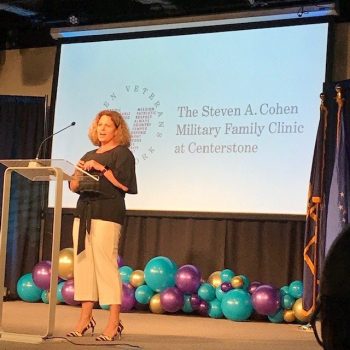 More than 1,000 people now have the knowledge to help prevent veteran suicide thanks to a recent event in honor of national suicide awareness day.

On September 10th, The Steven A. Cohen Military Family Clinic at Centerstone, Fire Watch and the North Florida/South Georgia VA joined forces and took a stand to prevent veteran suicide. These like-minded organizations jointly hosted a National Suicide Prevention Day “Stand Down” featuring Suicide Prevention Motivational Speaker Frank King.  The “Pledge to Prevent: A Community Call to Action to End Veteran Suicide” event aimed to increase awareness of veteran suicide locally and nationally while also sharing resources of hope for those in need.

“This is an opportunity for each of us to recommit ourselves to end veterans’ suicide,” Katie Eicher, North Florida/South Georgia VA Health System Suicide Prevention Program Supervisor said. “We must each take action together.”

Fellow event organizer, Liz Sherr, Clinic Director for the Cohen Clinic at Centerstone in Jacksonville echoed Eicher’s message. “It is an honor to work with the VA and Fire Watch to sponsor this event as each of us individually and organizationally have a role to play,” Sherr said. “We must all work collaboratively to support veterans and military families; not just those in crisis but veterans who need support in their daily lives as well.”

More than 1,000 people attended the event either in person or virtually – all receiving the message loud and clear thanks to King’s powerful message that stressed “Start the conversation.”  Frank told of his lifelong battle with depression and thoughts of suicide – both personally and within his family.  He spoke passionately about his Grandmother’s struggle with depression that resulted in suicide and of other family members whose lives tragically ended in suicide.  Frank wants each of us to start the conversation, giving people who battle mental and emotional Illness permission to give voice to their feelings and experiences surrounding depression and suicide, and to create a common pool of knowledge in which those who suffer, and those who care about them, can swim.  He believes that where there is humor there is hope, where there is laughter there is life, nobody dies laughing.

“Frank’s speech was incredibly moving,” Sherr said. “It reinforced why we are here today – to save lives. Each of us can start the conversation with a veteran or military family member.  The Clinic’s co-sponsoring of this event with the Veterans Administration and Fire Watch is reflective of this community commitment and a recognition that no one organization alone can end veterans’ suicide. Only when each of us personally commit and take action can we fulfill this lofty goal.”