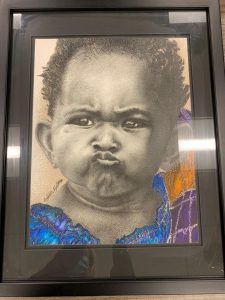 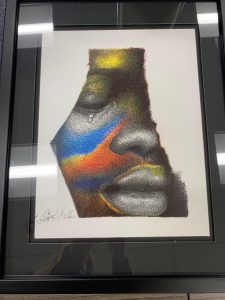 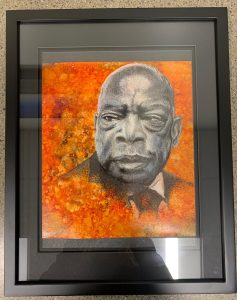 Every once in a while a person comes along whose story must be told; her hardships must be shared so that others may be inspired by the knowledge that despite today’s struggles, tomorrow’s dreams can come true. Cynthia Baldwin is one of these people.

Shy, almost timid at first, Cynthia entered the Steven A. Cohen Military Family Clinic at Centerstone carrying a black bag under her arm. Walking slowly, maybe even hesitantly, she followed me down the hallway to do something she had never done before – show her artwork to a stranger.

As an event organizer, I was busy preparing, planning and recruiting artists for the 3rd Annual Cohen Clinic at Centerstone Community Art Show. Cynthia’s name was passed to me through a mutual friend. They had told me that she had been through a lot in her life, although what that entailed, I had no clue. I had only spoken to her briefly on the phone softly encouraging her and hoping she would submit her artwork. I had been lucky enough to see a picture of her work the day before. I knew how good it was. What I would soon learn, however, was that ‘a lot’, was an understatement.

As Cynthia became more comfortable around me she slowly opened up. I learned she grew up in a small town in Arkansas where her mother often cautioned her that her hometown held little opportunities for her future and that maybe the military would provide her a better life. She didn’t share much more, rather, she simply confirmed that she took her mother’s advice and joined the Army. Yet, her way out of that small town her mother warned her about didn’t last. Cynthia served four years during Desert Strom/Desert Shield only to learn that combat wasn’t the sole threat to her safety. Her health was.

Diagnosed with a rare form of breast cancer, Cynthia found herself fighting a whole new war. I was left stunned as she continued to unpack that bag and tell me her story.

“At first, I was like, ‘this is actually happening’,” she told me blankly. “There begins the journey. I started living my chemo sessions and decided to share them on Facebook live to help others.”

Cynthia fought this new enemy with courage not all-together different than that of the Soldier she was and had planned to continue being. She recorded every pin prick, every chemotherapy session, every challenge, and every emotion she endured so others wouldn’t feel alone.

“It helped me,” she said matter-of-factly when I asked why she chose to share such intimate moments on social media. “That community was important and if I could help one other person going through the same thing than it was more than important.”

In awe of her strength, I now stood in front of the artwork she never showed and listening to a story she rarely told. This woman had every bit of my attention and she didn’t even realize it. She went on to explain that she found herself on the verge of homelessness. After battling cancer? After having to give up her dream, I wondered? How unfair could the world be? And, then just when I wanted to reach out to her, maybe offer some sort of comfort, she looked down at her artwork. I followed her gaze already struck by its brilliance and I knew. This woman had all the strength she needed. Her bravery was evident even in those hesitant steps and her courage came with her next words.

“I had an art teacher at a young age that inspired me,” She said. “She introduced me to pointillism and I began amazing her every day. Once I was homeless, I had some pens. I drew that tear drop picture out of anger.”

Pointillism is an artistic technique often crafted in pen, charcoal, colored or graphite pencil, consisting of tiny dots of pure colors that, when taken in as a whole, reveal a masterpiece. The ‘tear drop’ Cynthia referred to at that moment, said all she needed to say. Her work spoke for her as artwork tends to do.

Cynthia had never shown her talent to others. This day, just days before she’d put her masterpieces on display for the community to see, I stood in awe of the woman and the work.

I was left nearly speechless, but I had one more question. What was next for her? What would Cynthia Baldwin do after she took this leap?

Cynthia Baldwin’s work was front and center at the 3rd Annual Cohen Clinic at Centerstone Community Art Show. It was her first time showing her work. She was nervous – unsure what others would think. Her work was sought after. Her family celebrated alongside her and her final words to me that day when it was just us in a conference room, unpacking a black bag echoed in my mind.

“Believe in yourself. That you’re going to make do everything you possibly can do make happen.”

One dot at a time.