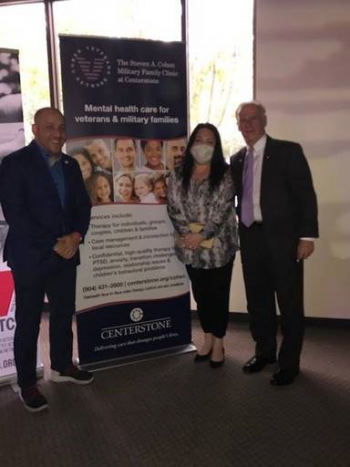 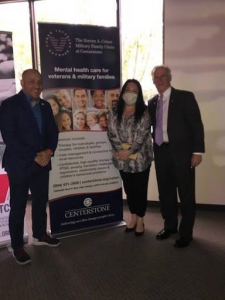 More than 800 people now have the knowledge to help prevent veteran suicide thanks to a recent event in honor of World Suicide Prevention Day.

On September 10th, The Steven A. Cohen Military Family Clinic at Centerstone, Fire Watch and the North FloridaSouth Georgia VA joined forces and took a stand to prevent veteran suicide. These like-minded organizations jointly hosted a Suicide Prevention Day “Stand Down” featuring suicide survivor, suicide prevention speaker and filmmaker, Kevin Hines. The “Pledge to Prevent: A community call to action to End Veteran Suicide” event aimed to increase awareness of veteran suicide locally and nationally while also sharing resources of hope for those in need.

“It is not enough to be against veteran suicide,” Katie Eicher, North Florida/South Georgia VA Health System Suicide Prevention Program Supervisor said. “We must each take action together.”

Fellow event organizer, Brigadier General (Ret.) Michael Fleming, outreach director for the Cohen Clinic at Centerstone echoed Eicher’s message. “As Katie indicated we are here today not just to talk about ending veteran suicide, but how each of us can take action,” Fleming said. “We must all work collaboratively to support veterans and military families; not just those in crisis but veterans who need support in their daily lives as well.”

More than 800 people attended the event either in person or virtually – all receiving the message loud and clear thanks to Hines’ powerful story of survival after jumping off the Golden Gate Bridge. He passionately expressed that if he had had just one person ask him about his troubles he would not have jumped and indicated suicide ideation is a liar, as the ideation told him that no one cared and that he was worthless. Yet his family and friends did care and he regretted his leap as soon as took it.  He stressed there is no shame in asking for help and challenged every attendee to be there for anyone who may need that listening ear.

“Kevin’s speech was incredibly moving,” Fleming said. “It reinforced why we are here today – to save lives. The clinic’s co-sponsoring of this event with the Veterans Administration and Fire Watch is reflective of this community commitment and a recognition that no one organization alone can end veterans’ suicide. Only when each of us personally commit and take action can we fulfill this lofty goal.”

With assistance from the Partnership For Mental Health, the Steven A. Cohen Military Family Clinic at Centerstone in Jacksonville, ...

With assistance from the Partnership For Mental Health, the Steven A. Cohen Military Family Clinic at Centerstone in Jacksonville, ...

TAPS: Support is here for Families of Fallen Heroes

Families of those who made the ultimate sacrifice for our nation are not alone thanks to a new partnership.  ...

One thing is definite within the Steven A. Cohen Military Family Clinic at Centerstone – our team is a ...

Military families across seven states are now able to receive the help they need thanks to the Steven A. ...