If You Know Someone at Risk for Suicide 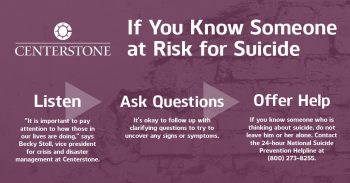 Suicide is the 10th-leading cause of death in the U.S. for all ages. Every day, approximately 132 Americans die by suicide. That’s one death every 11 minutes. Suicide accounted for more than 47,000 lives lost in 2017 and more than 48,000 in 2018. The numbers are rising in nearly every state across the U.S., according to the Centers for Disease Control and Prevention.

Studies report that one out of two people knows someone who has died from suicide. And for every person who has died from suicide, another 280 other people have seriously thought about it. The CDC estimates that there is one suicide for every 25 suicide attempts. Risk factors for suicide include a history of suicide attempts, a history of self-harm, mood disorders, stress, and unemployment.

Other warning signs include a change in personality, poor performance at work or school and a sudden switch from very sad to calm/peaceful. If you know someone who is at risk for suicide, it can be difficult to know what to do or say.

Here are some ways to help.

One of the best ways to help a loved one and show that you care is to be available and listen to their concerns. Simply listen without judgment or assumption.

“It is important to pay attention to how those in our lives are doing. Try to look for signs of hopelessness, worthlessness or isolation in those around you. Take statements like ‘Maybe everyone would be better off if I wasn’t around’ or ‘I’m not sure how much longer I can take this’ seriously, and be there to listen,” said Becky Stoll, vice president for crisis and disaster management at Centerstone.

After listening to their concerns, it’s okay to follow up with clarifying questions to try and uncover any signs or symptoms.

Don’t let the fear of ‘what if’ stop you from asking a loved one if he or she is thinking about suicide. Be direct, without lecturing, and talk openly and freely about suicide and listen to their response.

If you know someone who is thinking about suicide, do not leave him or her alone. Try to remove any means that you think may aid a suicide attempt and contact the 24-hour National Suicide Prevention Helpline at (800) 273-8255. Centerstone’s 24-hour crisis lines are:

When someone loses hope, they can’t see a way out, but hope can be found with help and support. For more resources, visit centerstone.org/suicide.

Navigating your own mental wellness can be hard, but helping to navigate mental health challenges of a friend or ...

There is a common belief that suicide occurs most often in the cold months, especially around Thanksgiving, Christmas and ...

For many, the holidays are filled with friends, family and constant celebration. People put socialization on overdrive and seem ...

Cyberbullying in the digital world

As communication technology continues to advance, people become increasingly connected through the web and social media. 95% of teens ...

“If it weren’t for her, I wouldn’t be here.”   The suicide rate in the United States has increased ...