A Call for Help: The Right Voice Can Save Lives 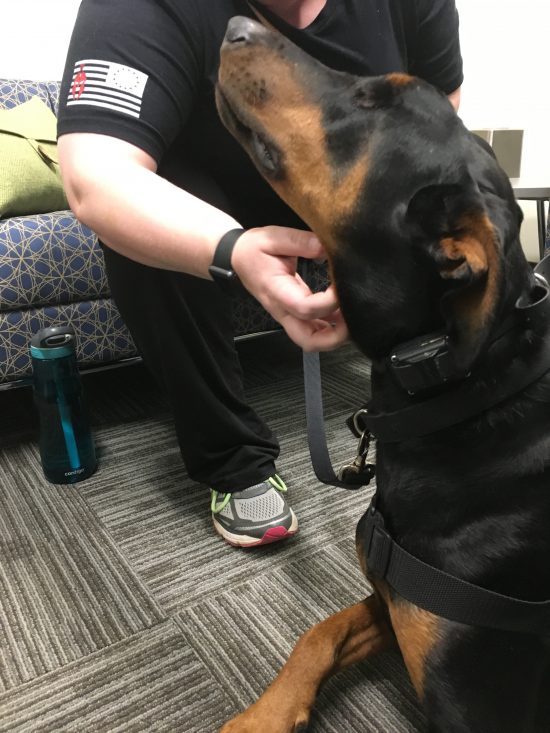 Sometimes a phone call can save a life. Ask Virginia, an Army veteran who once dreamed of becoming a JAG lawyer. Virginia struggled with anxiety, depression and suicidal thoughts for nearly 15 years. She spoke with therapists, nearly too many to count, but never felt heard or understood. She was discouraged and unsure where to turn next when she suffered another blow that would ultimately have her calling for help.

“I lost a friend unexpectedly, then a month later another by suicide. I knew I needed help. I was crying when I called the Wounded Warrior Project (WWP).” That phone call led to another, but this time, Virginia was the one on the receiving end and the voice she would hear sounded like hope.

It was the receptionist at the Steven A. Cohen Military Family Clinic at Centerstone. After being informed by WWP representatives of Virginia’s call, the clinic’s front desk staff wasted no time getting in touch with her. That effort made all the difference.

“They met me where I was. I wasn’t in a place (emotionally) where I could come in yet. So we did an intake over the phone. We made a safety plan!” she exclaimed.

Virginia’s previous attempts at therapy had left her disillusioned to such an extent that the act of making a safety plan meant the world to her, and sadly, that disheartening feeling is common. Many Veterans report connecting with a therapist can be difficult. A prior marine recently featured by CNN put it this way, “I went in, being vulnerable and laying out my problems, and they were dismissive and condescending to me and treated me like I am some kind of victim. Imagine what damage that can do to veterans who seek help.”

Perhaps equally concerning, the National Academies of Sciences, Engineering, and Medicine recently reported nearly half of American veterans who need mental health care don’t get it. Possibly due to accessibility, or to social or self-perceived stigmas surrounding mental illness. Add to this, more than 20 Veterans a day die by suicide, and as many as 20% of service members returning from deployments show symptoms of post-traumatic stress disorder, anxiety and depression, and it would seem addressing veteran mental health care is critical. Moreover, combating the fear of seeking help, meeting veterans where they are and ensuring compassionate care may ultimately be a matter of life or death.

Thankfully, Virginia found that listening ear inside the Cohen Clinic at Centerstone where every staff member, if not a veteran or family member themselves, is trained in military culture and understands the unique challenges this population endures. The Clarksville clinic which is part of the Cohen Veterans Network, a network of soon to be 25 clinics nationwide, is founded on the principal that all veterans and their loved ones deserve to live happy, healthy lives regardless of the ability to pay and without barriers.

Virginia’s enthusiasm would suggest that principal is being upheld. “We made a safety plan!” she would exclaim again with a smile. “No one had ever done that for me before and I knew then this was a place that cared about me. They even cared about my service dog, Titan,” she added laughing at the memory. “They would give him treats every time we came in. That was special.”

Looking back Virginia says it may have been those simple gestures that had her believing this time therapy would be different. Where before she felt misunderstood she felt welcomed, and that comfort gave way to progress. “Everybody here is rooting for you to get better. It’s the first place I was excited to come to,” she explained. “It was the first place that said, ‘I can help you.’”

Virginia has since completed her short-term individual therapy sessions at the clinic and is relieved that her faith was not misplaced. This time, therapy was different. She connected with her therapist and committed to a treatment plan. She shared her concerns, worked through haunting memories and took steps towards healing. In the end, she is proud to say she no longer has thoughts of suicide, and with her therapist’s guidance, has learned to better cope with her anxiety and to overcome her depression.

“This place put me in the right direction to start healing because I couldn’t do it myself. I’m getting better physically. I walk and do yoga. I’m slowly getting more open. I’m taking a holistic approach to health and seeing clearer.”

She may be hearing clearer too, after all, she finally heard hope in a phone call and it made all the difference.

Mood swings are characterized by a drastic change in emotion from one side of the spectrum to the other. For example, if at one moment you are freely going about your day, and the next moment you’re suddenly upset, irritated or hostile – then you may suffer from mood swings. Mood swings affect both men ...

The onset of serious psychotic symptoms was sudden and dramatic for George, a 51-year old man living with schizoaffective disorder. In George’s reality, a mental “Star Chamber” was holding him on trial for crimes too terrible to fathom. These fantasies left him wandering the streets shouting at unseen forces out to destroy him. Due to ...

A New Approach to Chronic Pain and Anxiety

Opioid addiction continues to grow nationwide and kills three people in Tennessee each day. At a Centerstone clinic in Nashville, Dr. Alicia Batson offers clients an alternative to prescribed opioids and benzodiazepines in the treatment of chronic pain and anxiety—based on her personal experience. Having always believed there was no separation between the mind and ...

Speakers have been announced and registration is now open for the Trauma Informed System of Care Conference, co-hosted by Centerstone, a national leader in behavioral health care. The conference will be held on Saturday, May 4 from 8:30 a.m. to 4:30 p.m. at John A. Logan College’s main conference center in Carterville, IL. Register online ...

Want to stay in touch with new updates?

Fill out the form to subscribe to our newsletter!