Finding Our Words of Recovery

Home / Finding Our Words of Recovery 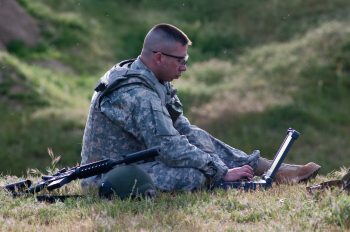 This is not the kind of writing that we were indoctrinated with in school. Natalie affirmed two things for me. First, is that authentic writing is difficult. We struggle with ourselves to be rid of the domestication that made us teachable in school.

The second, is that writing about our personal experience is a cop out. This kind of writing is for story tellers, entertainers, children’s hour at the library.

Allowing ourselves to be immersed in our experiences of combat requires valor, a personal commitment to writing IT. Not writing about IT, but the courage of the frontal assault across open ground to engage our greatest fears, our worst experiences, and our overwhelming guilt for having survived.

IT is where we go in our daily thoughts and nightly terrors. As warriors, as survivors we live IT in every moment.

Writing IT as it happened, as we saw, and heard, and smelled and felt IT, this is the ever present reality some call our life.

Writing down the bones for ourselves as warriors, as combat survivors is one way that we can begin our journey Home.

So, began my encounter with IT, the beginning of my journey home.

In the fog of traumatic stress there was no way of describing what the experience of combat had done to me. My body was the only thing that came back alive. The rest of me had been killed along the way. The rest of me was the part that felt nothing.

There were no emotions other than the incessant rage I learned never let out. All the rest of me was numb, except for the guilt. The survivor guilt that continuously gnawed at me. The guilt of still being alive.

For years these were feelings for which I had no words.

My heart began writing three days after I had been at the Vietnam Veterans Memorial on the capitol mall. The writing was an unintended and essential movement of my heart and hand.

My choice was to let the words happen. There was nothing special about the environment. I was seated in a fast food restaurant my back against a wall and a clear line of sight to the door.

For reasons I don’t remember I had a handful of 3×5 cards that I was shuffling. Placing a card on the table words began to appear on the card. The words seemed to happen faster than I could think them. These were heart words.

Death did not come peacefully in Viet Nam.
It did not lie on satin covers,
surrounded by flowers and grieving loved ones.
Death was not attended to by skilled professionals
competent in the art of giving death a peaceful appearance.
In Viet Nam death raged, full blown and evil,
from the bowels of the earth.

Death shrieked in ecstasy
amidst the screams of the wounded.
Death glided effortlessly through the gunfire,
pausing only briefly to assure itself that the mutilated body
that another young man held in his arms
had no pulse.

Death viewed its handiwork with satisfaction
as the scorched, tree-like husk
of an incinerated human being
was stuffed, amid retching and curses,
into an olive drab plastic bag.

Ever present, death clung defiantly and in jubilation
to the absurdity of Viet Nam.
Death exerted its dominance
through all of the human senses,
especially the most primal sense,
the survivor’s sense of smell.
What did Viet Nam smell like?
Diesel fuel, cordite, and death.

Survivors did not come back to the world with maturity.
They returned very, very old.

Thirty-seven thousand words, a few at a time in different places, quiet places. Often I did not know what I had written until I re-read the words. Those words that were right for me. The words were an essential part of my journey home.

In a quiet place, at a quiet time you may find the words that will begin you journey home. I hope so.

April is the Month of the Military Child, and for good reason. Children who are raised in military families ...
routine Military Services Military