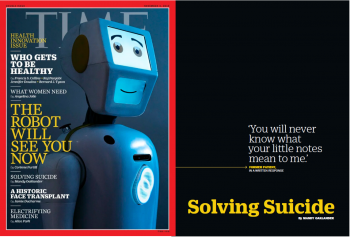 “They’re Going To Pull Out All The Stops” ~ Becky Stoll, vice president for crisis and disaster management for Centerstone

Centerstone is featured in TIME Magazine’s Nov. 4 Health Innovation Issue, which includes a special report on the ways hospitals and behavioral health centers are changing their suicide prevention protocols.

“The new best practices emphasize putting people on the grid and not letting go. Few places do it as well as Centerstone, a large community mental-health center based in Tennessee that obsessively follows up with patients. By reprogramming its digital health-records system, Centerstone made screening for suicide risk mandatory; patients who respond a certain way are automatically designated at risk and seen more frequently. If one of these patients doesn’t show up for an appointment and can’t be reached within a few minutes, a 24/7 crisis team is pinged.

“They’re gonna come after you—in a loving, kind, gentle way, but they’re going to pull out all the stops to make contact with you so that we know that you’re not in any kind of major crisis,” says Becky Stoll, vice president for crisis and disaster management for Centerstone. One of these routine phone calls reached a patient as he was standing on the edge of a bridge ready to jump; the caller persuaded him to return to the clinic. Within two years of making this change and others in 2014, the rate of suicide deaths at Centerstone had dropped by 64%.”

At Centerstone, in accordance with the Zero Suicide in Health and Behavioral Health Care initiative, suicide prevention measures are integrated in the roles of staff at all levels and across the continuum of care.

May is Mental Health Awareness Month, and the United States is likely more aware of mental health concerns than ...

Talking to Your Children about Consent

When parents have a newborn baby or infant, there’s often an expectation that friends and loved ones will want ...

Centerstone, a national leader in behavioral health care, is hosting an art show, The Pandemic Project: Processing the Pandemic ...

What is Bipolar Disorder and How Can We Help?

Have you ever cycled through a wide range of emotions and assumed it was a small case of mood ...