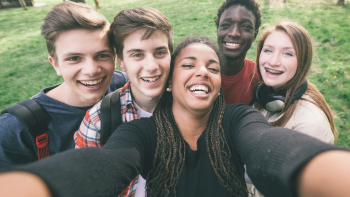 Parents preparing kids for back-to-school season with fresh pencils and paper should also consider equipping them with the right apps.

Nearly three-quarters of teens own smartphones, and 25 percent of those reported being “online constantly,” according to the Pew Research Center. This makes clear that back to school for adolescents today involves more than backpacks and notebooks—it’s about tech.

Of course, with new technology come risks. Parents are all too aware of the possibilities for online bullying and the ability to send graphic images. But rather than avoid smartphones altogether, there are applications available that can actually help teens navigate the challenges and tough conversations they face—both digitally and in the real world.

Check out these free apps that can help your child with obstacles they may come up against such as bullying, self-harm, drug and alcohol abuse and sexting.

A 16-year-old Canadian girl created an app called The Daily Difference. This app serves as a resource for young people trying to cope with bullying and mental health challenges.

The app took about a year to develop with the help of a Saskatoon-based developer.

It includes eight self-help modules that have information and advice on dealing with things like anxiety and depression.

It also has a section that allows users to send a text message to a pediatrician or psychologist asking them a question about mental health.

According to Gizmodo, this app identifies an incoming nude photo, censors it and then prohibits the user from using their phone’s camera “for up to 20 minutes” in an effort to prevent them from responding with an explicit photo.

It also reportedly locks the phone’s camera if a user writes a text the app deems “inappropriate.”

If the user keeps at it, the app can prevent them from using the camera for a longer period of time, and if they attempt to send an explicit message four times within a day, the company will inform their parents.

Note: This app is only available on Android devices

Need a good resource to prove smoking is a bad idea?

Smokerface shows the short-term and long-term effects of cigarette use on your face.

The app was developed for 10- to 15-year-olds but can be used by anyone.

Just download the app, add your photo and see what a nicotine habit can do. Once kids visualize the dark side of smoking, they’re less likely to light up.

The urge to self-harm can come suddenly and powerfully.

Calm Harm was created to help you resist that urge. It provides the user with tasks to manage the urge to self-harm which come in multiple categories: Comfort, Distract, Express Yourself, Release, Random and Breathe.

As you use the app, you can track your progress, further motivating you to refrain from self-harm.

Note: This app is meant to accompany treatment rather than replace it.

Being a teenager is hard. That’s why we have answers to a lot of common questions that teens might have – about mental health, drugs and alcohol, sex and relationships, social media and internet safety, bullying and more.

Talking to Your Children about Consent

When parents have a newborn baby or infant, there’s often an expectation that friends and loved ones will want ...

Families come in all shapes and sizes, including single-parent households headed by a widowed, divorced, or separated parent with ...

How Holiday Celebrations Can Bring You Happiness

The holidays are all about celebrating the values that bring us together in life, such as our friends and ...

Have you seen the way that family is portrayed in television and films? Sometimes it can paint the picture-perfect ...

How often do you vocalize how proud you are of someone? It feels good to make people smile, but ...