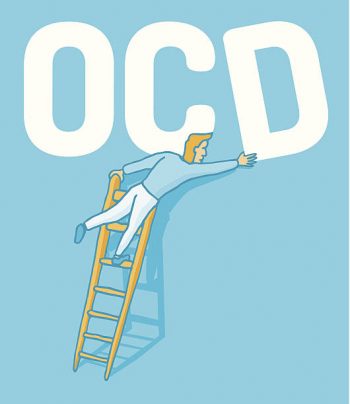 Obsessive-Compulsive Disorder (OCD) is an anxiety disorder characterized by recurrent, unwanted thoughts (obsessions) and/or repetitive behaviors (compulsions). For individuals with OCD, worries, doubts and superstitious beliefs are common in everyday life. Some people can be methodical, precise and value order and cleanliness, but not have OCD.

People with OCD suffer from intrusive and unwanted thoughts that they can’t seem to get out of their heads (obsessions), often compelling them to repeatedly perform ritualistic behaviors and routines (compulsions) to try and ease their anxiety. Most people who have OCD are aware that their obsessions and compulsions are irrational, yet they feel powerless to stop them. Some spend hours at a time consumed with debilitating thoughts and performing complicated rituals.

Everyone has rituals, such as checking to see if the stove is off several times before leaving the house. People with OCD perform similar rituals, even though doing so interferes with daily life. Individuals with OCD find the repetition distressing. Although most adults with OCD recognize that what they are doing is senseless, some adults and most children may not realize that their behavior is out of the ordinary. OCD involves intrusive, unwanted thoughts or images about a number of things that torment them.

One-third of adults with OCD develop symptoms as children, and research indicates that OCD might be hereditary. It strikes all genders in roughly equal numbers and usually appears in childhood, adolescence or early adulthood. Fifty percent of individuals with OCD show symptoms in childhood. The onset for boys is typically ages 6-15, and ages 20-29 in girls. OCD affects about 2.2 million American adults, and the problem can be accompanied by eating disorders, other anxiety disorders or depression.

Obsessions and rituals associated with OCD can interfere with a person’s normal routine, schoolwork, job, family or social activities. Trying to concentrate on daily activities may be difficult. If untreated, OCD can interfere with all aspects of life. However, with treatment, individuals with OCD can take back control! Most people who seek treatment experience significant improvement and enjoy an improved quality of life. Successful treatment often includes a combination of behavior therapy and medication.

Many therapists use a combination of cognitive and behavior therapies, often referred to as CBT. In this type of therapy, the patient is actively involved in his or her own recovery, has a sense of control and learns skills that are useful throughout life. The goal of cognitive therapy is to change unwanted and disturbing thought patterns. The individual examines their feelings and learns to separate realistic from unrealistic thoughts. The goal of behavior therapy is to modify and gain control over unwanted behavior. The individual learns to cope with difficult situations, often through controlled exposure to them.

A form of CBT, exposure and response prevention (ERP) has shown great success in helping people manage OCD. It gradually exposes people to their feared obsessions and teaches them to become less sensitive to them. First, ERP slowly breaks the connection between obsessive thoughts and the anxiety they produce. Then, it breaks the connection between the compulsion and the reduction in anxiety that follows.

Medication can be very useful in treating OCD, and it is often used in conjunction with one or more of the therapies listed above. Medication is effective for many people and can be either a short-term or long-term treatment option. Medication decreases anxiety enough for people to begin ERP. Selective serotonin reuptake inhibitors (SSRIs) have been shown to help people with OCD. Individuals with OCD should talk with their doctor or therapist about medication to determine which, if any, will be most effective in treatment.

If you experience obsessions and compulsions that affect your life in a negative way, see your doctor or mental health provider. It’s common for people with OCD to be ashamed and embarrassed about the condition, but remember, even if your rituals are deeply ingrained, treatment can help.

Your Diagnosis Doesn’t Define You

Throughout history, mental illness has been seen as taboo or controversial and has been met with many stereotypes that ...
Diagnosis Mental Health trauma

Shifting from year to year without taking a break can make you feel like you are going through the ...
Mental Health tips and life hacks New Year

For some, the season of giving might feel more like the season of stress. People typically celebrate the holidays ...
holidays Mental Health tips and life hacks

How to maintain positivity through the holiday season

The holiday season is often depicted as the best time of the year, but that doesn’t necessarily ring true ...
Mental Health holidays

Growing up, you hear the expressions, “rub some dirt on it” or “suck it up” when trying to express emotions through pain, sadness, ...
Mental Health tips Men