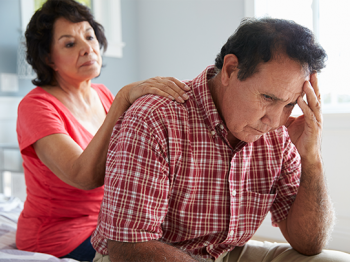 The onset of serious psychotic symptoms was sudden and dramatic for George, a 51-year old man living with schizoaffective disorder.

In George’s reality, a mental “Star Chamber” was holding him on trial for crimes too terrible to fathom. These fantasies left him wandering the streets shouting at unseen forces out to destroy him.

Due to his hallucinations, George could not physically care for himself, refusing showers and fresh clothing. Although kind-hearted and mild-mannered by nature, people avoided the scary-looking man.

George’s only real support was an older brother who let him sleep in a dilapidated trailer behind his house.

George avoided the outside world as much as possible. Only a small disability check kept him locked into a dreary existence.

With the help of Centerstone, George received treatment, which proved to be almost immediately beneficial.

Over a course of six weeks, George’s delusions dramatically lessened.

The accusing voices in his head hushed to the point he had to strain to hear them. On most days they were simply gone.

George himself came to see that the “Star Chamber” and the voices were not real.

Now on track to move into his own supported-living housing, George, the once wild-eyed, unshaven man, has been transformed.

George now smiles easily and lights up any room he enters.

While he is sad about the years lost in a delusional maelstrom, George is determined to focus on his future and the greater promise it now holds.

But just what are these disorders exactly?

Bipolar disorder /ˌbaɪˈpoʊlər dɪsɔːrdər/ n – the result of unusual shifts in mood, extreme highs and lows in emotion and energy that result in the inability to carry out day-to-day tasks.

Hallucinations occur when a person hears and sees things that are not “there.”

Hallucinated voices interact with a person by commenting on their behavior. However, in some cases, these voices will order the person to do something like instructing them to harm themselves or others.

People who experience hallucinations may talk to themselves – although they believe they are talking to another person.

People experiencing delusions have bizarre thoughts and fixed false beliefs. If it often very difficult to convince people who experience these delusions that they aren’t based in reality.

Delusions can be very complex and have multiple layers and involve the person being at the center of some large plot or scheme. Believing one is being followed, spied on or being poisoned are common examples of delusions.

Individuals with delusions can also experience hallucinations. Delusions combined with paranoia will likely cause additional anxiety and fear.

“Paranoid” thought and experiences are often based in fear and suspicion to the point of obsession.

Paranoia leads people to think they’re being hunted or followed or facing some sort of injustice. They may feel as if anyone and everyone is out to get them.

Occasionally, paranoid ideas can be quite complex and ignite hostile behavior.

Calling someone “crazy” while displaying paranoid or delusional thoughts will usually only agitate them more.

On the railways, derailment occurs when a train jumps off the track.

For people who may be experiencing a thought disorder, derailment occurs when they slip further and further away from the original point of a discussion. Derailing thoughts can just wander off and never return.

A person who experiences derailment uses words and phrases that have a loose association with the original topic in a conversation. Their frame of reference changes from one viewpoint to another. This can cause confusion for the person experiencing derailment as well as those around them.

Learning to live with a thought disorder

Clinicians commonly use the term “thought disorder” when describing illnesses and diseases too difficult to understand. These “thought disorders” can occur over any length of time. They can affect anyone.

Each year, 2.4 million Americans suffer from schizophrenia, and about 100,000 people in the United States will be diagnosed with schizophrenia.

The National Institute of Mental Health calls the periods of time when a person suffering from a thought disorder and experiences unusually intense emotion, a change in their sleep pattern and a sudden increase in unusual behaviors as “mood episodes.”

How to get help?

Talking with a doctor or other licensed mental health professional is the first line of defense for anyone who thinks they or a loved one may have a thought disorder.

A doctor will look to rule out a thought disorder by checking to see if an illness is to blame for the symptoms.

Centerstone offers trained mental health professionals who are experienced in diagnosing and treating these disorders.

Your Diagnosis Doesn’t Define You

Throughout history, mental illness has been seen as taboo or controversial and has been met with many stereotypes that ...
Mental Health trauma featured

Shifting from year to year without taking a break can make you feel like you are going through the ...
Celebrating Life Mental Health tips and life hacks

For some, the season of giving might feel more like the season of stress. People typically celebrate the holidays ...
Mental Health tips and life hacks holidays

How to maintain positivity through the holiday season

The holiday season is often depicted as the best time of the year, but that doesn’t necessarily ring true ...
holidays Mental Health

Growing up, you hear the expressions, “rub some dirt on it” or “suck it up” when trying to express emotions through pain, sadness, ...
Mental Health tips Men