PTSD After Combat and Holiday Gatherings 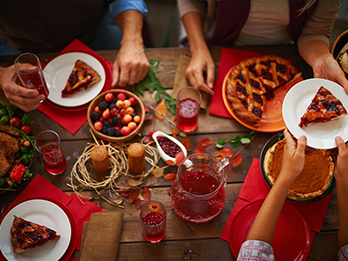 A warrior in a family social environment is usually quiet. Quiet does not mean that they aren’t listening. If you want to include them in a conversation use, a question unrelated to the military or locations. Be prepared for a short answer, usually as close to one word as possible. Move on. Maybe try again in twenty or thirty minutes. Then let it go.

If your family members are huggers, keep in mind that the safe space for a warrior is about two arm lengths out. Someone coming inside that two arm’s length perimeter may trigger an automatic threat reaction from a warrior especially if the move is quick or unexpected. Asking for a hug is a good idea.

For family dinners, consider a warrior with PTSD in your seating chart. Seat him or her with their back to a wall and the rest of the room and the door in view if possible.

I still recall, usually without a panic attack now, my first Thanksgiving with my fiancé’s family. It was a close and happy family. My fiancé was the second youngest of eleven children in her family. So, it’s dinner for twenty-six and their children. This was a significant learning experience for me.

Everything about the time together and the dinner was wonderful if you were one of the family. The brothers teased their sisters. Dads and kids played football some outside, some in the house. This family was happy and loud. They were just being who they were. My problem was that my anxiety level had maxed out five minutes inside the door.

Looking back forty-plus years, it was a classic combat PTSD reaction. I declined dessert and was out of there as quickly as I could be. It was November, and I drove all the way back to Post with the windows rolled down shouting and screaming to release the stress and burn off the adrenalin.

If you are having a guest that has spent time in combat, gentle and easy are good. Moderating noise levels is good. Combat survivors don’t require much social care and feeding. A safe space and the opportunity to listen may be just fine.
Ken Jones, PhD©

Many values are instilled in service members from their earliest days in basic military training and boot camp. Some ...
Speakers Bureau Military Services